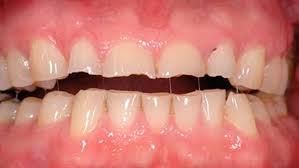 Clenching or grinding your teeth constantly and excessively, performed unconsciously is known as Bruxism or Clenching.

The constant pressure on the teeth and tension in the muscles responsible for chewing, leads to the emergence of symptoms such as pain in the jaw joints or headache when waking up, in addition to causing wear or softening in the teeth.

Bruxism can occur at any time of day, but it is more common at night, during sleep, known as nocturnal bruxism, and is usually caused by psychological factors such as stress or anxiety, but it can also be related to genetic or respiratory factors. , such as sleep apnea.

It is important that in the presence of symptoms, an appointment is made with the doctor or dentist, to identify the cause and start the most appropriate treatment. At the Oto Face clinic, we have specialists who can help you with the diagnosis and indicate the best treatment, which may include occlusal splints, medications, laser, and acupuncture, among others.

If bruxism is not identified and treated, problems may develop that involve the functioning of the temporomandibular joint, known as TMJ, which is the joint that connects the jaw to the skull.

Nocturnal bruxism does not always have a defined cause, however, it can happen due to genetic, neurological or respiratory factors, such as snoring and sleep apnea, for example, in addition to being related to psychological factors, such as stress, anxiety, or tension.

Bruxism is also quite common in children.

Contact with Ortodontia Brasilia for Bruxism and Tooth Clenching.